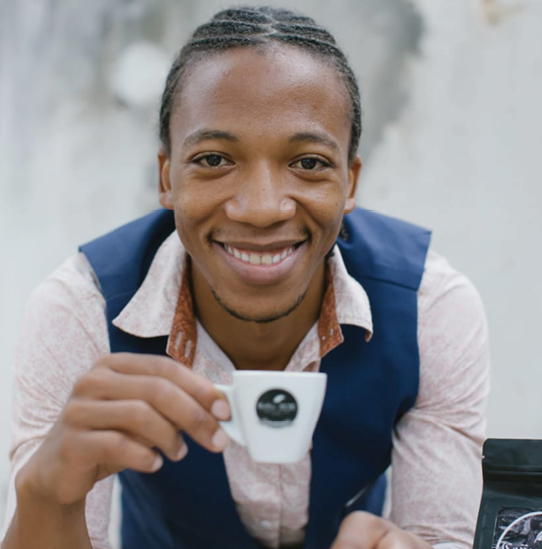 Stellenbosch Entrepreneur of the Month (Mar 2022)

By Nicole McCain2nd Mar 2022Apr 16th, 2022Entrepreneur of the Month
No Comments

From beans to bucks:

Mhlengi Ngcobo is working towards a sustainable future, one sip at a time

A surprise diagnosis as a child sparked a lifelong passion for Mhlengi Ngcobo. His passion lies in the humble coffee bean and in creating a way for small scale farmers to reap the rewards of their labour.

When Mhlengi was 13, he was diagnosed with young hypertension and advised to avoid all caffeinated beverages. Intrigued by caffeine’s impact on his body, he began researching the chemical. More than a decade later, he now owns and runs a coffee roastery that caters for coffee drinkers with similar health concerns.

Mhlengi started CoffeeMM at the age of 22. The coffee roastery, located in Stellenbosch, sources fresh green coffee beans from African countries such as Rwanda, Kenya, Ethiopia and Burundi, roasting them to the individual’s requirements. Every order is prepared with delicacy to meet the customer’s unique preference. CoffeeMM also supplies restaurants and companies with fresh gourmet coffee.

Following his diagnosis, Mhlengi discovered that different roasting could produce different coffee, including brews with less caffeine that were more suitable for those with similar health conditions.

“When you start because you’ve had a personal experience, it’s not just about profit. It’s about awareness, seeing the change you can make,” he says.

But this research was only put to good use as a final year civil engineering student. Mhlengi was required to complete a project management course in which he chose to simulate a coffee roastery. The project was so successful that he decided to turn it into his career.

However, the journey did not run as smoothly as Mhlengi had simulated in his coursework. With no funding, Mhlengi launched the business with a R150 coffee grinder and a bicycle as his only equipment. And despite putting in the hours, in his first year as a business owner, he sold only one bag of coffee.

“I made the assumption that everyone drinks coffee, but I was wrong. That bag was a lesson,” he says. “I had no experience of running a business. I didn’t even have any work experience. I had to learn during the process. From creating the product to branding and marketing, I had to teach myself everything,” he recalls.

And investing so much into the business also came with a personal cost. Mhlengi had to drop out of his studies twice in the space of five years to focus on the business. “There’s also the emotional and psychological side of entrepreneurship that no one tells you about. You have to drive yourself every day, even when the results are next to nothing,” he says.

“But I just had to do it. This business became the only thing I could see that could become my legacy.”

In around 2018, Coffee MM reached a turning point, and all of Mhlengi’s hard work started to show results. He won several contracts to supply gourmet coffee, which added to the company’s credibility, and he developed a loyal following of customers. He opened a coffee stand at the CoCreate Hub in 2021.

Mhlengi has also since completed the Stellenbosch USB SBA Programme in 2020. He has won the award for Business with the most potential, and in 2021 he was nominated and recognized as one of Mail and Guardian’s 200 most influential Young under 35 South Africans.

A Brewing for change

Mhlengi’s vision is bigger than just providing the perfect cup of coffee. He dreams of growing his business to help small scale farmers earn more for their hard work.

“Our vision is to empower small-scale coffee farmers. The coffee industry has a reputation for the exploitation of farmers. It’s a real-life problem that farmers experience daily. Estimates say that farmers only earn between 7 and 10% of the retail price of coffee. And that’s not even gross profit; they still have to cover their costs,” explains Mhlengi.

He dreams of using the profits of CoffeeMM to develop agro-processing plants in South Africa and Mozambique that would allow farmers to roast their coffee beans and earn more for the produce.

“The value of the coffee industry is growing. It’s one of the fastest-growing markets because of the way coffee is becoming a luxury, status product. Small farmers are struggling to meet the growing demand because they can’t afford to upgrade their infrastructure with the low earnings they make. If we create an agro-processing plant, they can move up the value chain,” says Mhlengi.

But until he can open that agro-processing plant, he will settle for more coffee shops in hubs such as Johannesburg and Cape Town. “This would allow us to bring in enough income to pursue our vision of empowering small scale farmers,” he says.